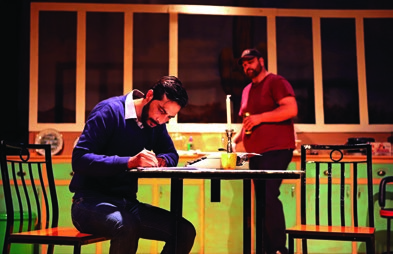 THT
Actors Divya Dev and Alejandro Merola performing in one of the scenes of the play True West. The play revolves around the issues of sibling rivalry.


Throughout history brothers have gone to war against one another in pursuit of wealth and power.

Taking inspiration from this reality, True West portrays how sibling relationship can come to ruin as they crave success or attempt to realise their dreams.

An adaptation of American playwright Sam Shepard’s play of the same name, True West is being staged at Kausi Theater, Teku from September 6. Directed by Deborah Merola, the play originally based on native American life, is able to relate to Nepali society as well as it points out the problem of obsession with success, loneliness and debilitated social relations.

The play opens with an appealing setting of a living room with a balcony garden. And there stands the well-dressed Austin (Divya Dev) emitting pleasant vibes. But the pleasantness disappears when his brother Lee (Alejandro Merola) enters the room. From their conversation it is evident that they are not on good terms; their mother (Kurchi Das Gupta) is away on a vacation to Alaska.

Austin is working on a screenplay about a love story but gets distracted by Lee with his irrelevant questions. This continues until producer Saul Kimmer (Eelum Dixit) comes to visit Austin to get updates on the screenplay. But Lee interrupts them and proposes a script idea to Saul. Now the question is will Saul decline Austin’s work and choose to work with Lee? What will be the situation if that happens? And this unfolds as the play progresses.

The linear storyline has been executed perfectly accompanied by powerful acting and perfect composition of all theatrical elements, ensuring the audience an engrossing watch. The scenes have been placed accurately while Deborah Merola has also guided her actors perfectly — they deliver realistic performances.

The director’s dedication towards her work was evident as she approached the audience for feedback as soon as the play ended on September 8. One of the audience members shared his story with her: “During my art class there was one person very good at his work and he was good at speaking too. I used to get jealous of him. That used to make me feel hopeless. This play has made me realise that it’s a human nature and happens to all.” This feedback resembles the play’s intent.

Other than that, the musical score is well designed and plays out aptly. Props like wooden rack, fridge, grass carpet, flower pots, plates et cetera give an impression of a well-furnished perfect room.

There is nothing great about the lighting, but it is well balanced.

The actors have given a terrific performance. Alejandro stands out with his wonderful acting — his appearance complements his character of a dominating brother.

His expression while delivering the comic as well as serious performances are intact and powerful. Dev looks classy and delivers his dialogue effortlessly; he nails every scene with his acting — be it a sad, funny or serious scene. Dixit and Gupta have brief roles but they are asset to the play as they deliver their dialogues with great clarity and precision generating the intended effect of being in a confused state of mind.

The play is being staged till September 15 every day at 5:30 pm, with an additional show on Saturday at 1:30 pm.