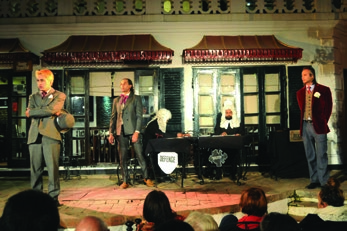 
Gross Indecency: The Three Trials of Oscar Wilde recounts how Oscar Wilde, Irish poet and playwright of the Victorian era, was toppled from the apex of British society into humiliation and ruin. Written by Moises Kaufman, and directed by Bruno Deceukelier for One World Theatre, the play was staged at Babermahal Revisted from November 30 to December 9.

Deceukelier and his actors did a fine to job at staging Kaufman’s vision while trying to depict the suffering of LGBTIQ people.

Gross Indecency began with a case taking place in a court room — the Marquess of Queensberry (Rajkumar Pudasaini) was being prosecuted for criminal libel and slandering Oscar Wilde (Sushrut Acharya).

Marquess and Oscar were seated at two tables on either side of the stage. Four narrators (Uptal Jha, Surabhi Sapkota, Navin Neupane, Gaurav Bista) along with Alize Biannic were also on the stage doing different roles — as eyewitnesses, newspaper writers, and as male prostitutes to George Bernard Shaw and Queen Victoria.

But Marquess, father of Oscar’s love Lord Alfred Douglas (Sandeep Shrestha), had evidence that causes Oscar to drop his charges against him.

It rather led to Oscar’s arrest for “gross indecency” with multiple men. Then, after two more trials, Oscar got convicted and was sentenced to two years’ intensive labour with maximum penalty.

The play was successful to depict how homosexuality was seen as a “heinous crime” during the Victorian era. At the same time it beautifully showcased how simple human emotions are beyond social barriers and nothing can stop them.

The actors successfully portrayed their respective characters, presenting a powerful and emotional performance.

From jealousy to pain, hatred, sexual desire to “love beyond one’s imagination”, the actors of the play performed everything to perfection.

That’s also because the director had done a brilliant job in selecting the right cast for his play. And he had created a court room drama against the backdrop of the beautiful Baber Mahal Revisited. Props like table, trial documents, newspapers enhanced the essence of the courtroom.

Despite the stage being a courtyard, there was a right balance of the use of lights. Sound effects and pre-recorded music were also used in a few settings as per the play’s requirement.

Dialogue was the life of this English-language play — the poetic language was pleasant to hear. Yet the elaborate English from the Victorian era had quite complex sentence structures, demanding full attention from the audience.

Costumes — high-waist trousers paired with dress shirt, vest, cravat tie, hat and boots among others — reflected the essence of the Victorian period.

Performance-wise, the actors did an incredible job. Acharya as Oscar was phenomenal — pain and suffering was what the play attempted to portray and he did it right. He was able to capture the attention on him throughout the play.

Shrestha as a lover, going through a major heartbreak, was just the right fit for the role — it felt like the character Lord Alfred Douglas had been created only for him. He did everything with ease. The duo — Acharya and Shrestha — shared a strong chemistry. As a father worried about his son, Pudasaini delivered an okay performance. Other actors were accurate in their respective roles.

But sometimes too many things were happening on stage at once — actors reading newspapers while the court case taking place, made it quite chaotic.

Nonetheless, it was an appealing and enjoyable performance that was able to generate sympathy towards Oscar and LGBTIQ people.